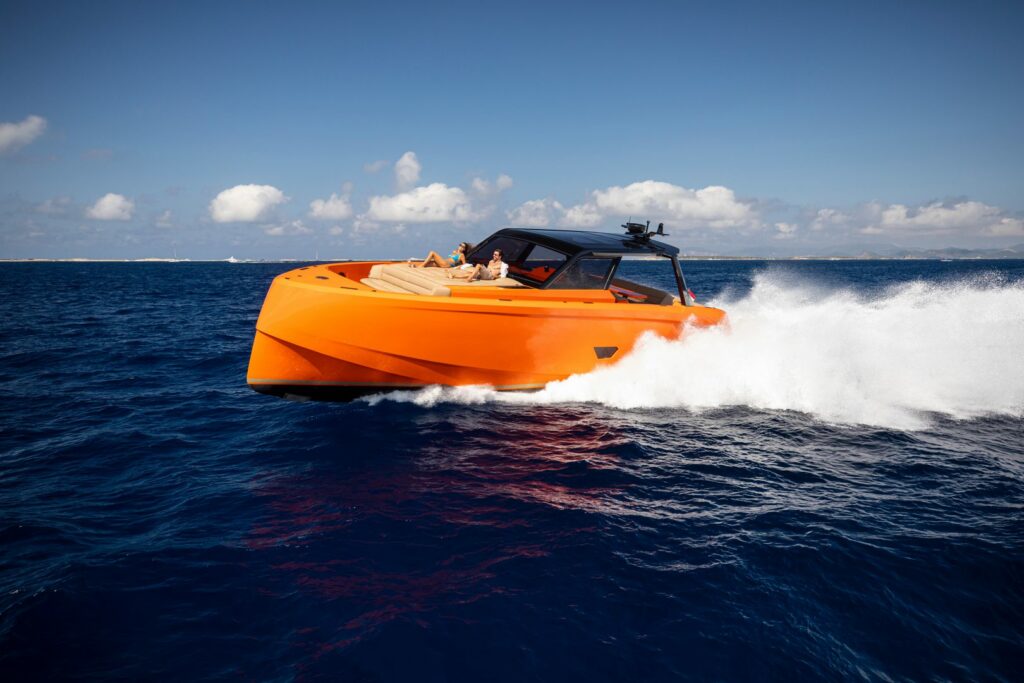 A highly experienced sailor with more than 35 years of boating under his belt, Peter Hen knew exactly what he was looking for when he went to Boot Düsseldorf in 2020. But after…

… the brand he had in mind couldn’t meet his specs, it was the legendary flexibility of Vanquish that rose to the challenge. The fabulous result, launched in June 2021, is the bespoke VQ52 Coco Loco…

It’s not just the characteristic VQ lines that make Coco Loco instantly recognisable when she sails into her home port in Ibiza. While her bright orange livery might make observers presume that a Dutch celeb is in town, it’s actually a German at the helm. And the bright colours chosen by Peter were one of many completely custom wishes that have been met in serious style by Vanquish. 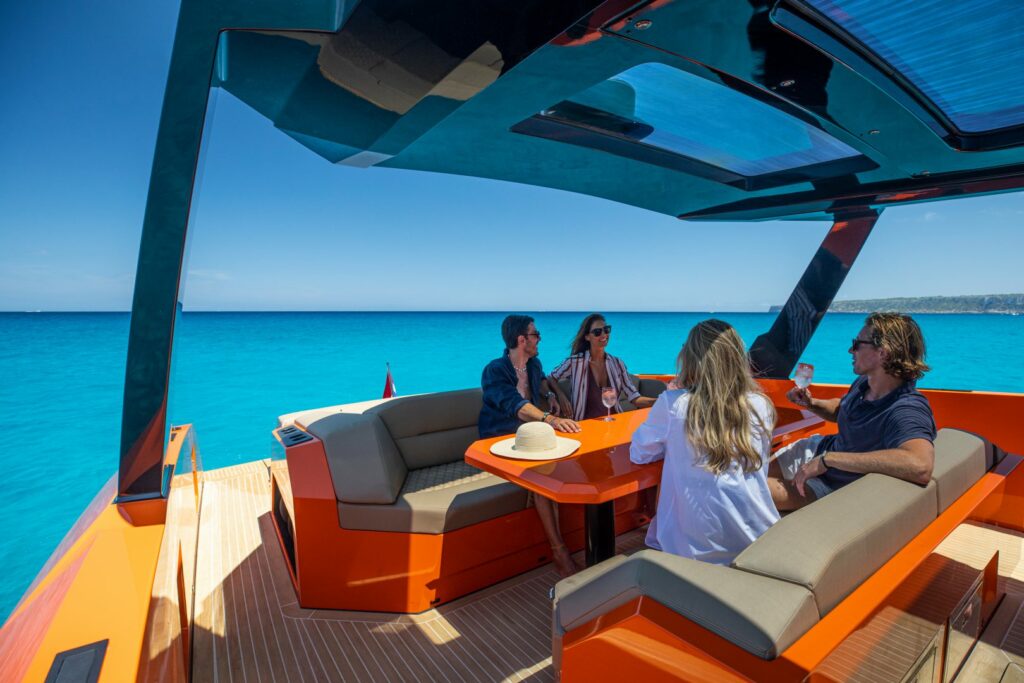 Before we look at these requests in more detail, let’s go back in time to January 2020 and the giant exhibition halls of the Messe Düsseldorf Hall. Peter Hen is making a beeline for a specific stand where he hopes to order his first new motorboat in a decade (his previous one was bright yellow in case you were wondering). Having seen an example of this particular brand on the water in the Balearics he was hoping that the yard could build him a boutique version in the 52-foot size that would fit perfectly in Peter’s berth in Ibiza.

“I told the salesmen at the stand that I liked their boat but needed to fit bigger engines and surface drives than the standard specs allowed. To my surprise and disappointment, I was informed that the engines had to be the same as in the catalogue, with no room for change. Seeing that our discussion was at an end, I turned to the next stand which was occupied by a brand that was a new name to me.” 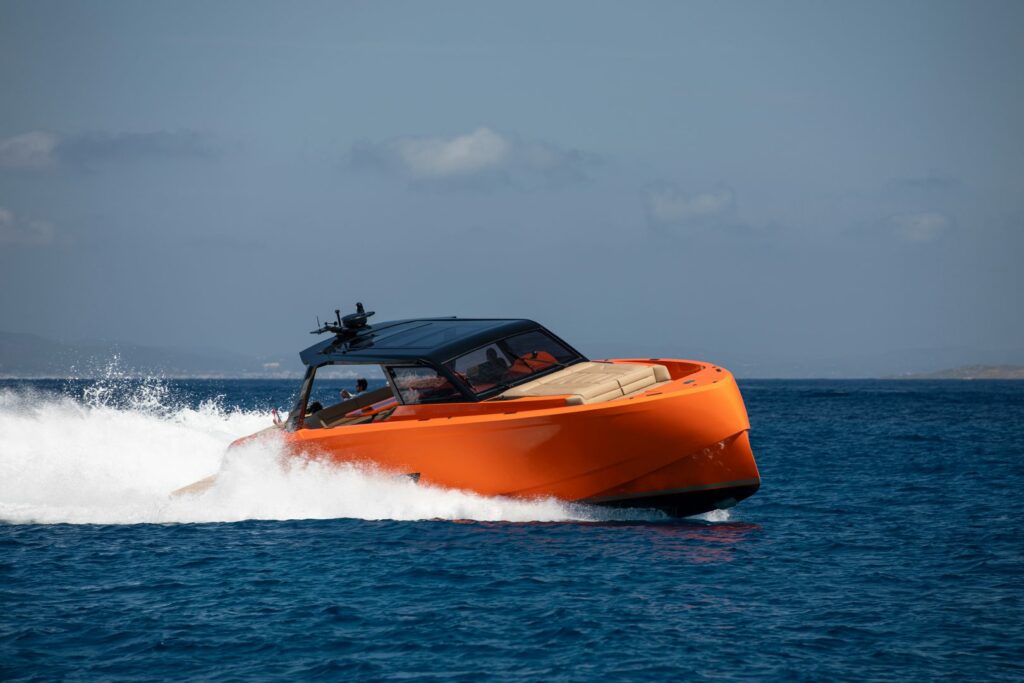 “I loved the looks though of the models Vanquish Yachts had on display so I went up to the sales rep and asked the same question. ‘Can you build me a 52-footer with 1000 hp Volvo D13 engines plus surface drives?’ ‘Let me call the VQ engineers’, came the response. Ten minutes later I had the green light and, with the images of another VQ52 in front of us, we took the conversation further.

“I want a T-Top version but can you move the legs outside the hull so I can use the total beam and create more space?’. ‘And as my arms are not as strong as they used to be, can you install a winch on the foredeck in place of the usual seating area, making sure it’s comfortable to stand there and use? Oh, and I only want one sleeping cabin as my wife and I only go away together for the weekend at most, so can you adapt the layout, giving extra space for the engines?’

“The affirmative answer to all these questions and the way Vanquish optimises the assets of aluminium to build bespoke boats gave me great confidence and we went ahead. It was the start of a fun boatbuilding adventure that saw me visit the yard in the Netherlands on many occasions. And the customisation of Coco Loco continued apace as new ideas arose. We optimised the entrance to the engine room, for instance, in order to make it easy for me to access. We added a special hatch in the deck so that the engines could be checked and cooler refilled when required. And then there were the engine room fittings in stainless steel…You don’t get more personalised than that.” 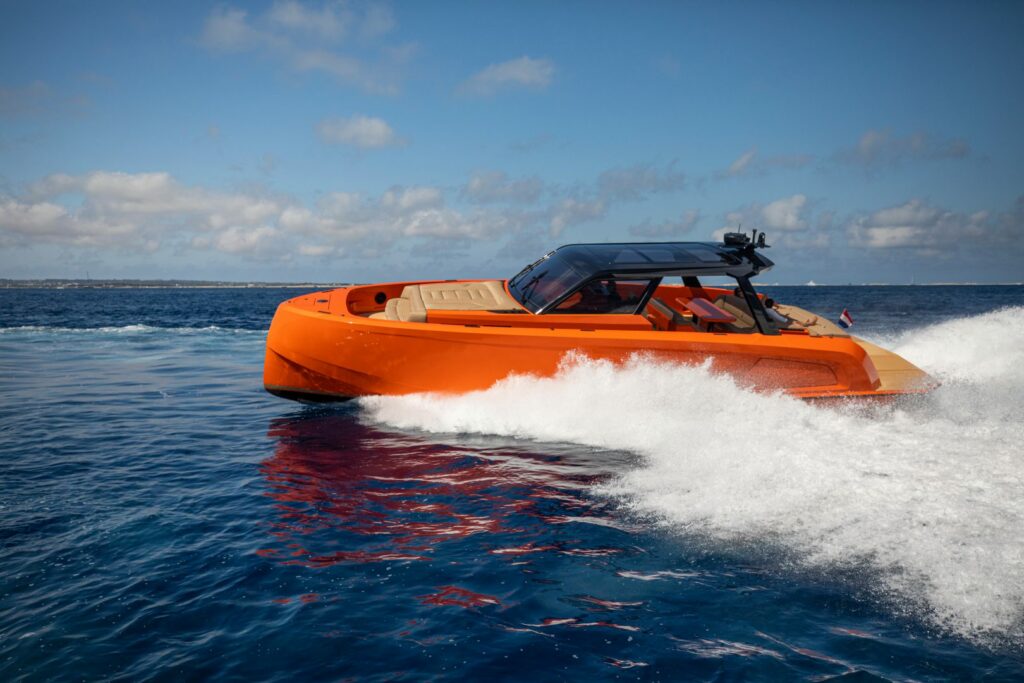 There are very few yards in the world that could have dealt with this latter request for an owner looking to exclusively use stainless steel couplings and connections made by his own company in an engine room of this sophistication. The Vanquish facility received a large pallet of fittings and installed each and every one to perfection.

“Vanquish is an innovative and super-flexible yard that builds the boat which a client actually wants,” confirms Peter. “This non-traditional thinking has resulted in a custom powerboat that makes everyone stop and stare each time we come into a marina. What’s more, this VQ52 has an amazing performance at sea at all speeds and in all conditions. The special shape of the hull keeps us extremely dry and we always feel completely safe.”

Delivered in June 2021 and named after a new restaurant and cocktail bar in Santa Eularia opened by Peter’s wife Jessica, Coco Loco is berthed in a prime location close to the Vanquish Ibiza office. Come see for yourself next time you’re on the island…